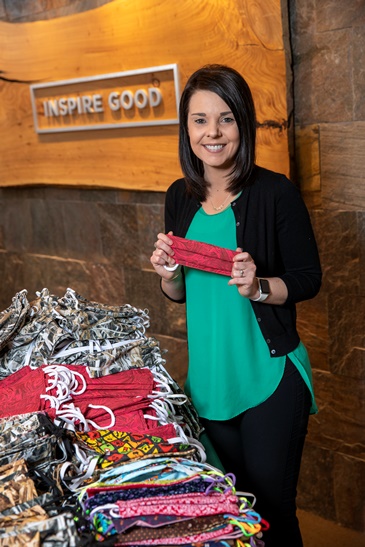 Ashley Jordan’s role is focused on helping meet the needs of nonprofits. Most of the time, that’s by linking volunteers to the agencies; but in the last few months, it included a whole lot more.

Ashley is director of Acts of Service, a program started by Lippert Components Inc. in 2017 to be a hub for its employees to connect with nonprofit needs, primarily in northern Indiana. Employees from LCI and more than 30 other business partners have given more than 500,000 hours of service since the program began. In late 2019, LCI gifted the program to the Community Foundation of Elkhart County to encourage more businesses to join the movement towards volunteerism.

Ashley worked with Acts of Service at LCI and became director at the community foundation. When stay-at-home orders in Indiana were issued in March, Ashley and nonprofit employees worked from home—still focusing on how to help people and to help each other as they worked toward that. “We’ve had to work a little bit harder and dig a little bit deeper into our relationships,” she said.

She approached Pete McCown, president of the Community Foundation of Elkhart County, and said there was going to be substantial need. He approved purchasing materials and Ashley went to work.

She knew LCI had industrial cutters and found a connection to get fabric in Arkansas for cheaper than what we could get locally. A sticker had fallen off the shipment and Ashley says she put on her logistics hat, tracked down the skid in Chicago, and got it expedited to Elkhart in time for LCI to cut more than 800 yards.

When she encountered a shortage of elastic, she learned from her stepdaughter that loops used to weave potholders also work and ordered 75 pounds. She procured interfacing (the thin fabric used to close spaces in furniture) for a second layer in the masks. “All of my logistics had to be in line to pull this off,” she said.

She then used the Acts of Service network to secure volunteers to both build kits for the home sewer and the actual sewers. Ashley spent $4,100 and got more than 13,000 masks made that could even be used by healthcare workers on the front lines.

Jodi Spataro, chief advancement officer for the Community Foundation of Elkhart County, said, “During the early days of the stay-at-home order where fear and anxiety was thick, Ashley didn’t miss a beat and used volunteering to connect people to their passion. In doing this, she shifted the fear and anxiety to hope and action.”

The City of Elkhart honored Ashley with the Humanity in Action Award for her work during this time. Through Acts of Service, Ashley was able to fill needs nonprofits had—from finding disinfectant for one nonprofit in need to securing volunteers to help deliver food boxes to senior living centers to keep the seniors safer. “The volunteers were so kind to the seniors and gave them social interaction which they obviously craved, along with the food they needed,” said Allen Holt, REAL Services community outreach manager. “And secondly, the Acts of Service volunteers were touched by the grateful recipients of the food boxes. Everyone was happy and rewarded in different ways.”

Stay-at-home orders, social distancing, and quarantines did not eliminate the need for services.  Ashley found ways to overcome these challenges to help others. Her new focus is using the Acts of Service platform to find volunteers during a time when older folks are more reticent to do so for their own safety and business partners are limiting that by their employees due to liability. “It's ever-evolving,” she said.

That evolution is also expanding and changing the role of the Community Foundation in Elkhart County. Instead of only focusing on treasure and talent, CFEC can help others learn how to best give their time. “Bringing Ashley to our team allows our community to rethink philanthropy,” said Spataro. “Her generous spirit and the way she shepherds the business community to give back through volunteerism opened new doors to new opportunities throughout Elkhart County.”

Marshall V. King is a longtime newspaper journalist who is now director of communications and marketing for the Community Foundation of Elkhart County.