Pushing Back Against Negative Rural Stereotypes

During recent workshops held in early October at Manchester University and Hanover College, sociologist Ben Winchester provided a lot of evidence to push back against the negative stereotypes often attached to rural communities.

Here are six key takeaways from the “Rewriting the Rural Narrative” events led by Winchester, a rural sociologist with the University of Minnesota Extension. The half-day interactive workshops were offered by the Independent Colleges of Indiana, Indiana Humanities, and the Indiana Philanthropy Alliance. Resources around this event, including slides, articles, and photos, can be found at the bottom of this page.

Rural is changing, not dying.

Ben explained how rural populations have actually increased by 11% since 1970, but that urban and suburban areas are growing more quickly. Also, some areas categorized as “rural” have been so successful at growth that they’re now classified as urban. In fact, that has happened to 18 counties in Indiana amounting to more than 876,000 people living in formerly rural areas. The way we work is also changing—nearly all of rural residents (95%) are not engaged in agricultural industries, they’re primarily in education and health services. He credits rural areas for surviving the massive restructuring of their towns over the past several decades to their volunteers serving in civic and community leadership roles.

We need to do a better job of engaging our newcomers.

People aren’t necessarily moving to rural areas because of jobs, and it’s also not just because they grew up there. In the Minnesota survey he referenced, 2/3 of the newcomers had no previous ties to their new community. Other demographic notes: the majority of them have kids, a bachelor’s degree and incomes over $50,000. The challenge is how to find them, and how to connect with them. When you do identify them, invite them to coffee or lunch but with no strings attached—don’t make them join your board or donate, yet. Another great idea: Hold a regular newcomer’s supper and invite them together.

We live in a community, not an economy.

Don’t just count warm bodies to fill jobs. Recruit the right people by having a fuller approach to recruitment that focuses on regionalism and on community development, economic development and tourism. Don’t let county lines that were drawn more than 100 years ago deter you from working together. Finally, arm the people on the frontline with the tools to promote your assets. Train your HR departments and feed the gas station attendants with information about what people can do when they’re in your town. Sometimes locals forget about the great resources in their backyards like state parks, breweries, restaurants and unique shops.

There is a housing and population shift ahead.

Ben warned us to prepare for a great demographic shift. More than 75% of the rural houses are owned by baby boomers and 30% are over 70. Communities need to be prepared for change—up to 3/4 of their population could turn over in the next 20 years. How will your community welcome them and how can you treat your housing stock as a community asset?

Although most rural residents aren’t employed by the agriculture industry, beginning farmers are finding strong markets for their fresh food at farmers markets and local restaurants and breweries. So said farmer Liz Brownlee at the Hanover event. She moved back to her family’s farm near Crothersville after living on the East Coast. She said young farmers like her are needed as the bulk of current farmers—most of them Baby Boomers—prepare to retire.

It’s time to flip the script.

We can’t let the negative language about our communities persist and we can’t continue to portray rural success stories as the exception. Jennifer Danic, the president and CEO of the Steuben County Community Foundation, urged communities to communicate about what they have, not what they don’t have. Your community might not have a trampoline park, but you might have an exotic animal park. And, don’t forget—you’re not in the middle of nowhere, you’re in the middle of everywhere. 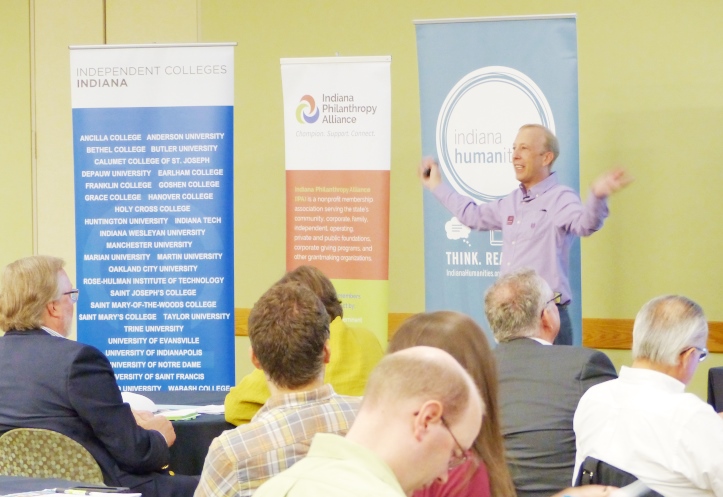 Explore resources around this event below, and view photos here.