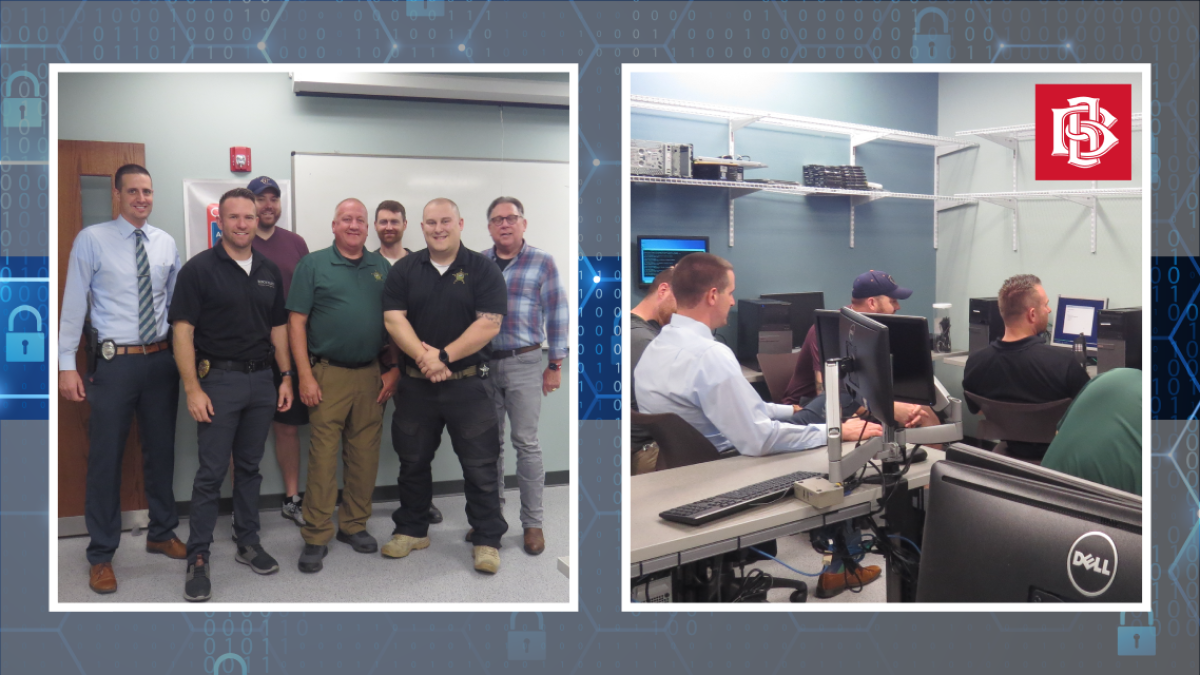 As technology grows, so too does the threat of cyber attacks on the community.

“Cybercrimes are the crime of the future. It's so rapidly evolving, and we see how it can really have such a detrimental effect on our community,” said Jim Duckham, chief of the Ball State University Police Department. “Someone can be in another part of the world and be committing a crime that impacts our community.”

“From the largest multi-national corporations to the smallest rural school districts, data breaches and malicious attacks are a significant—and growing—threat,” said Jud Fisher, president and CEO of Ball Brothers Foundation. “As we seek to support efforts that improve the quality of life in Muncie, Delaware County and Indiana, we recognize that cybersecurity will only play an increasingly important role.”

“Cyber attacks can affect anyone. These types of crimes have the ability to shut down governments, businesses and critical infrastructure,” said Tony Skinner, Delaware County Sheriff. “As far as our citizens being victims of internet crimes, this is where it is important for us to have knowledge and experience in these areas.”

Ball Brothers Foundation’s initial funding for Project Sybertooth was a $25,000 grant to Ivy Tech to support the creation of three cybersecurity courses tailored to a cohort of local law enforcement officers. The cohort currently includes officers from the Muncie Police Department, the Delaware County Sheriff’s Office and the Ball State University Police Department.

“We like to think of ourselves as a lighthouse for the community; people come to us for guidance,” said Jeff Scott, chancellor of Ivy Tech Muncie. “This is a tremendous opportunity for us to showcase our faculty and staff’s skillsets while also supporting our community agencies and, in the end, enhancing the safety and security of our community.”

Jennifer Gasiorek, Ivy Tech’s executive director of workforce and community engagement, said the classes are helping to build a network of cross-department collaboration and trust.

“These officers may not work together as teams out in the real world, but they're working together in here, so it's building a community of trust across the departments,” Gasiorek said. “We’re hoping other agencies will see this as a value, and we can start incorporating them in that brother/sisterhood.”

Duckham said he foresees this collaboration continuing beyond the classroom.

“You'll have a detective from the Muncie Police Department that went to the same school as a detective from Ball State, so you'll have a resource to call and say, 'Hey, I'm working this particular case, can you help me with it?'” Duckham said. “You already have a cohort of people that you're comfortable with because you went to school together and learned the same techniques, and I think that just adds value to collaborative networking.”

Prior to these courses, local law enforcement agents had little to no formal cybersecurity training.

“Most law enforcement agencies had to rely on one of their officers being ‘smart with computers,’ but not much happened beyond that,” Skinner said.

Nathan Sloan, chief of Muncie Police Department, said there was no formal training in cybersecurity when he was a detective either.

“There was nothing. It was just kind of learn as you go,” he said.

Even today, Sloan said only a few of his detectives have a background in the technology needed to solve cybercrimes, but he hopes Project Sybertooth will change that.

“Hopefully, it'll open up the field for more detectives to work these types of cases, instead of them just being diverted to one or two detectives,” he said.

Gabe Wilmes, a detective with MPD, is one of the officers enrolled in the Ivy Tech courses. He said he had no previous training in the area, but the classes are already broadening his skillset.

“We joked around in the first class about me being probably the least knowledgeable about computers, but already in the first couple of classes I feel like I'm learning a lot,” he said. “I don't have the background in technology that other people do, so this will be helpful for me moving forward and working on cases.”

Duckham said cybercrimes require a strong understanding of computers and technology. The Ivy Tech classes are designed to start with the basics and gradually build from there.

“We're starting with what computers are and how they function, then it's developing more to networking and online activities and data storage, where the weaknesses are on computer systems and networks, and how to prevent and investigate these crimes,” said Kris Swanson, a sergeant in the investigation division at MPD and a member of the training cohort.

Swanson said many cases today are solved with digital evidence, which includes cell phone data and internet activity. Even data from witnesses’ cell phones can be helpful in building timelines and corroborating stories, he said, so having this level of technological knowledge is becoming increasingly important.

But law enforcement agencies will need more than training to succeed in this ever-evolving field—they’ll also need modern equipment and software to help solve cybercrimes. With this in mind, Ball Brothers Foundation is inviting the three law enforcement agencies to apply for grants of up to $5,000 to purchase equipment that will further support their cybercrime capabilities.

“Ball Brothers Foundation seeing the need to collaborate is huge,” Duckham said. “If we weren't talking with the other agencies, maybe we'd all buy the same pieces of equipment, which is really unnecessary. If one of us has it, we can partner and share.”

Swanson said, down the road, the agencies may look to open a cyber lab—one location where the agencies can all pool their resources together.

Ivy Tech also plans to expand its training opportunities in the future with a “shoot or don’t shoot” simulator that stresses implicit bias. With the cybersecurity courses and simulator, Gasiorek said the Muncie campus is already serving as a model to other campuses across the state.

“Local law enforcement officials in Muncie are obtaining cybersecurity skillsets that some bigger cities don't offer,” she said. “They are going to be trained in an area, they are going to be trusted and looked at as experts as they grow in their training—and that's something to say for Muncie.”