The term impact investing is a phrase the philanthropic community has heard a lot in recent years. If you’re new to these investments, Rachel McIntosh from the PNC Community Development Division described impact investing for IPA as an umbrella term that encompasses any financial investment made with intent to advance a social good while also recovering principal and anticipating a financial return.

Many foundations are intrigued by these unconventional grantmaking investments, as they have the potential to deliver large and immediate returns for a cause. However, since these transactions carry more risk, as the return on investment and social impact is not guaranteed, foundations are justly hesitant to tap their endowments on such ventures. Therefore, rather than proactively seeking out impact investments, often, the most successful mission- or program-related investments are identified only when the right opportunity presents itself.

One recent impact investment success story is the Unity Foundation of La Porte County’s (Unity) Pine Lake project. Maggi Spartz, president of Unity, explained to us that it all started in 2010, when a board member noticed a ‘For Sale” sign at the site of a former restaurant on Pine Lake—a lake prized as a recreational hotspot. The ten lakes in and around La Porte are undoubtedly an important part of their community’s identity and charm. While many of the lakes in La Porte County are kept open to the public, Pine Lake has been heavily developed and had only a few public access or views of her beauty. In fact, Unity discovered the property was only available after the construction of a planned 6-story condo was sidelined for economic reasons.

Due to the difficult fiscal situation experienced by many communities recovering from the Great Recession, there was no one willing or able to purchase this property. Unity saw this as a real and timely opportunity to deliver on their mission of strengthening La Porte County now and forever by being a catalyst for social and economic vitality.

‘The Unity Park project has three parts:  acquisition, development, and endowment.’ explained Spartz. While Unity is the project manager in this effort, they championed incredible support from all sectors, including government, businesses, families, corporate foundations, unions, clubs, and other organizations. Besides the Unity Foundation, the largest investor in the project came from the DNR’s Bicentennial Nature Trust for the land acquisition (a first of its kind grant in the city).

After the 2-acre urban property was purchased in 2011, Unity staff went to work to educate themselves on these types of developments, learn more on impact investing, and understand the environmental impact of watershed protection plans. With the best interest of the community at heart, Unity led the effort to transform a demolished property into something beautiful and usable. 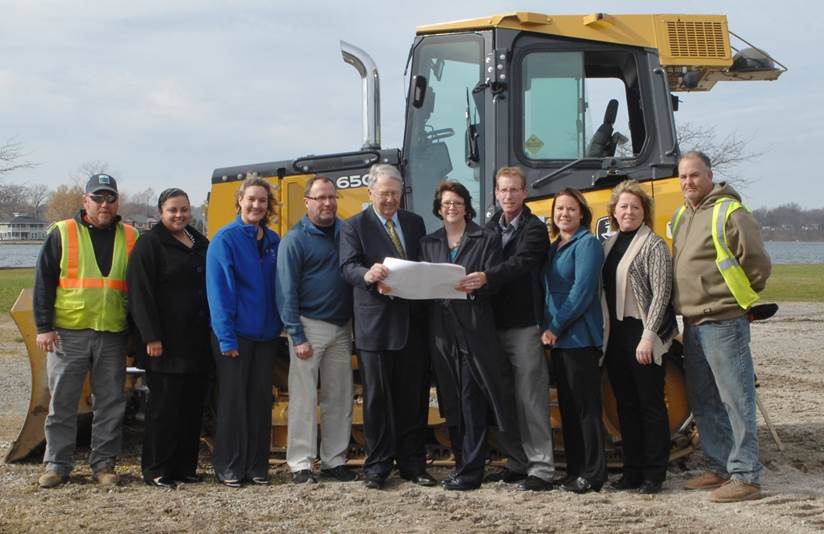 The final step for Unity was to build a permanent endowment fund, which generates the yearly funds needed to maintain the property for future generations. Last month, the Unity Foundation ‘gifted’ the ready-to-use property and maintenance funds to the City of La Porte. 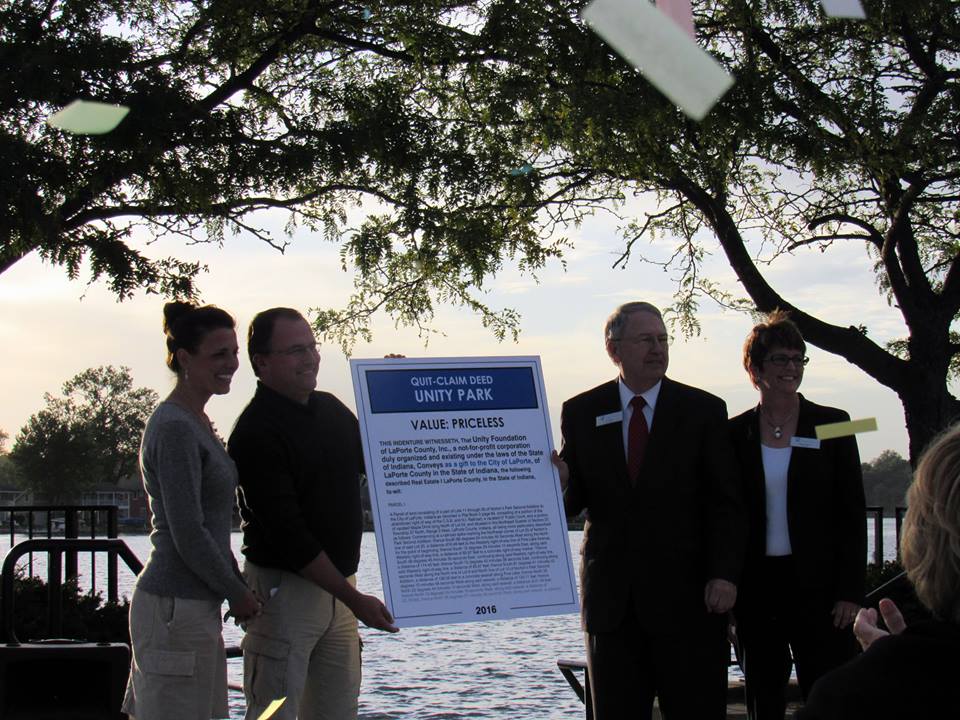 Unity Park creates a welcoming ‘front door’ for La Porte, keeps the lakefront open to the public, and improves property values, all while minimizing environmental impacts. The project has proven to be a powerful economic driver for Pine Lake. In fact, access to the green space played a huge role in the development of an adjacent $6 million hotel.

The full impact of this project goes far beyond Unity Park and Pine Lake. The positive publicity of the development and the experience gained by the foundation has enabled them to promote the economic importance and community impact of green spaces and pedestrian-friendly infrastructure. The foundation is also using their knowledge and resources to educate the public and businesses on environmental protections that work to preserve their lakes through the Love Our Lakes initiative.

This project was impactful in that the Unity Foundation seized on an opportunity and did something new, when no one else could.  Through ideal timing, bold decision making, and the ability to attract resources, the Unity Foundation made an investment in their community that will last forever.