Skip to main content
HomeNewsFoundations On The Hill: Sharing our story with lawmakers
Member News

Foundations On The Hill: Sharing our story with lawmakers

Representatives of community foundations from across the Hoosier state and staff of the Indiana Philanthropy Alliance gathered March 12-14 for the annual Foundations on the Hill.

We participated in seminars and visited with members of Indiana’s congressional delegation, including 9th District Rep. Trey Hollingsworth, Sen. Todd Young and others.

Our prime talking points focused on expanding the federal charitable deduction, protecting and enhancing donor-advised funds, providing full funding for the 2020 Census and signing on as co-sponsors of the federal Charity Act.

We also asked the lawmakers and staffers about which issues back home were resonating with them, issues that perhaps we as grant funders and community leaders might help them tackle. Educating a strong workforce and fighting opioid addiction were common themes.

The philanthropic sector is concerned that changes in the charitable deduction in the Tax Cuts and Jobs Act of 2017 may well lead to fewer and smaller donations to nonprofits undertaking important and impactful work in our communities. Making the charitable deduction available to all Americans – a proposal supported by the Indiana Philanthropy Alliance -- would increase giving by an estimated $4 billion a year.

Although pleased the charitable deduction remains in the federal tax code, many are concerned changes in the deduction may see the number of eligible Americans drop from 31 percent of federal income tax filers to 13 percent, according to a February 2018 study by the Joint Committee on Taxation, eliminating the incentive for about 21 million Americans. There’s a concern that giving to nonprofits could drop by $12 billion to $20 billion as a result.

However, leadership of the Community Foundation of Jackson County remains hopeful that our donors will continue to support our work and the work of those nonprofits who receive our grants. We contend that tax deductions aren’t the primary goal of many of our donors, although it is important for some.

We hold such hope because, quite simply, the sky didn’t fall after the Tax Reform Act of 1986 when it was predicted that changes in tax law would cause an $8 billion reduction in 1987 charitable giving. Instead, donations increased by $6.4 billion or 7.6 percent. We’ll hope and pray the same happens this year.

We contend this can happen—will happen—since we Hoosiers and other Americans donate because we believe in the work of those nonprofits we support. We like to help others, to make our communities a better place to live and work. We love our church, our school, our youth sports and arts programs. We recoil at the reality of hunger and the abuse of those more vulnerable, those among us with the least resources and opportunities and protections.

We believe giving will keep pace, because those vulnerable folks still need our donations, those nonprofits still need to do—and will do—their work. We hope that as more Americans keep more of their paychecks, they will give more and perhaps others will become givers.

Again, time will tell, and we’ll monitor donations and watch the data over the next couple of years.

Another topic of our conversations with lawmakers and their staff focused on two issues involving donor-advised funds. We urged lawmakers to consider expanding the IRA charitable rollover contributions to donor-advised funds. Such gifts to community, field of interest and designated funds are allowed without being taxed as income. 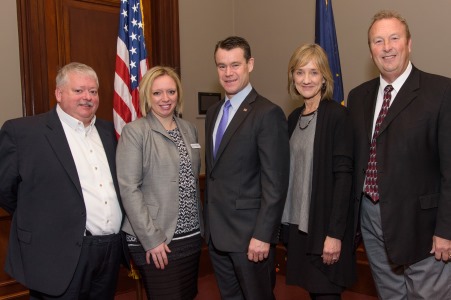 We also urged lawmakers to take a look at the valuable, impactful work that donor-advised funds help finance in our communities. There are some folks in Congress who cast a weary eye toward donor-advised funds, concerned that some donors are simply parking money and doing nothing with their gifts.

That’s not the case with the 15 donor-advised funds administered by the Community Foundation of Jackson County. Those funds produced nearly $22,000 in grants during 2017, including grants awarded to the Southern Indiana Center for the Arts, local churches, the Schneck Foundation, the Boys & Girls Club of Seymour, Clarity of South Central Indiana, Anchor House, Community Provisions and others.

Donor-advised funds are powerful tools, both for average people who want to make a lasting impact on their community as well as those folks with significant resources who are looking for an alternative to a private foundation to help benefit a myriad of charitable nonprofits they value.

Related to that conversation was one aimed at protecting endowed gifts in general. Foundations thrive when policies allow them to respond quickly and differently from the government and business sectors. The perpetuity of endowments ensures private resources are available to address tough social issues and evolving, changing needs of our communities.

The Community Foundation of Jackson County remains committed to helping our donors and nonprofits meet the challenges that face our community as, together, we build stronger, better tomorrows.

About the Author
President & CEO Dan Davis of the Community Foundation of Jackson County writes a monthly column. He is a member of the Public Policy Committee of the Indiana Philanthropy Alliance. The Foundation is at 107 Community Drive, Seymour, IN 47274. For information about donating, call 812-523-4483 or send an email to president@cfjacksoncounty.org.