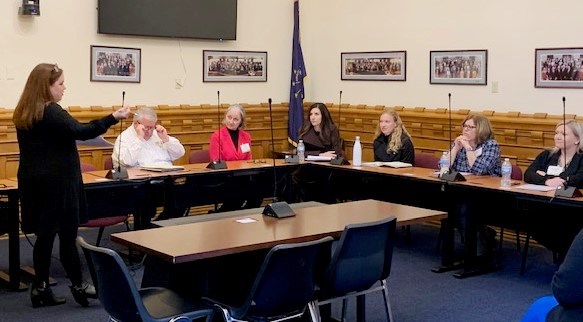 The following is a recap from IPA's Building Blocks of Public Policy workshop. Held at the Indiana Statehouse, this event looked at the legalities of foundations lobbying, revealed ways to engage in advocacy, and allowed attendees to learn from foundation's already engaging in public policy work. A full list of resources from this event can be found here.

Sabra Northam from Barnes & Thornburg, IPA’s legislative liaison with the Statehouse, walked attendees through the legal dos and don’ts of lobbying. Participants learned how the legislative cycle works, who the legislative leaders are, and what topics are likely to come up in the next session. Additionally, Northam reviewed what actions are permissible by law for both private and public foundations. IPA Board member Tracy Souza of Heritage Fund - The Community Foundation of Bartholomew County stated, “It is our responsibility to speak out. We shouldn’t think about what we can’t do, but what we CAN do, because we know things (about certain issues, our community, etc.).”

It’s all about relationships.

IPA CEO Claudia Cummings gave insights from her years working the Statehouse halls. She impressed upon participants that oftentimes getting things done is a matter of who you know and the level of trust you have established. Legislators and policy-makers must make decisions about a myriad of issues on which they may or may not be familiar. They rely on those they trust to advise them of the impact these policies may have. Taking advantage of IPA’s Day at the Statehouse, our legislative roundtables, Foundation on the Hill, and small one-on-one meetings with legislators and policy-makers determines how effective we can be as an industry in advancing philanthropy, both within Indiana and nationally. Cummings encouraged IPA members to build on-going relationships year-round. When asked why he has made it a point to attend FOTH the past 17 years, Brad Baumgardner of Parke County Community Foundation responded, “Because it works.”

“You are already doing advocacy, whether you realize it or not, just by the grants you make and the issues you support.” – Dan Davis, Community Foundation of Jackson County

Holly M. Davis, IPA vice president of external relations, led a discussion on philanthropy’s role in advocacy. She explained various tools in the advocacy tool box, including education, meeting convenings, and awareness strategies. She emphasized that education is where philanthropy has the ability to elevate the issues about which IPA members care most. Davis shared that at a recent IPA Legislative Luncheon, State Representative Ed Clere called philanthropists the “community memory,” highlighting philanthropists’ role in the continuity of government. Davis concluded her comments by reviewing the IPA 2019 Policy Agenda, giving members a chance to see the kinds of areas around which IPA advocates.

“In order to make change, we had to think about policy.” – Ellen Quigley, Fairbanks Foundation

As participants learned, private foundations are subject to stricter rules when it comes to engaging in lobbying. Ellen Quigley of Richard M. Fairbanks Foundation shared how they approach their work in combating  the substance misuse crisis. Quigley said Fairbanks used an issue collaborative with others in the space, research on addiction, and stories of successes in order to help educate policy-makers. While the Fairbank Foundation  does not mention any specific legislation, they do share analysis and best practices in tackling the crisis, which policy-makers can use to make informed decisions. In reinforcing that message, Dan Davis said, “If we aren’t advocating for what we believe in, you know someone on the other side (of an issue) will be.” Quigley said that educating through research and shared experiences has helped to impact positive change in Indiana.

Factors to consider when deciding whether to engage in a particular policy issue.

Many issues come before a legislative body, but not all of them are directly related to philanthropy or an organization’s mission. Attendees utilized a decision-making resource on taking action, sourced from the United Philanthropy Forum, to work through a hot-button issue: payday lending. Davis and Cummings led the group through an exercise that explored payday lending, including policy remedies like incentivizing other lending options or capping the interest on loans. Participants weighed who was impacted, if the remedy included member support, who else was already working in this space, what types of advocacy tools could be employed to impact change, as well as the pros and cons of philanthropy’s involvement. Ultimately, the group decided that, while perhaps they were not personally in favor of lenders charging high-interest rates for payday loans, this was not an issue they would like IPA to take up. Participants reported that they saw great value in walking an issue through the discernment process.