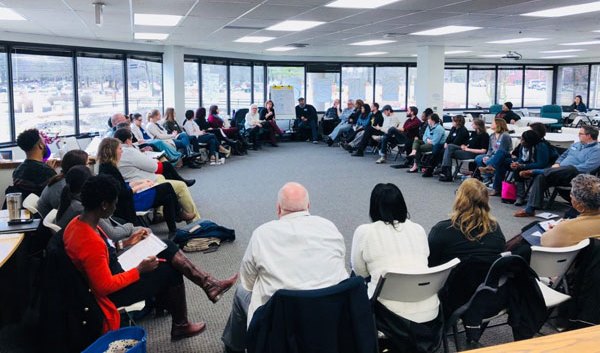 Story below from Indianapolis Business Journal.

The foundation, which has assets in excess of $426 million, changed its mission last year, Colombo notes, “to reflect its new focus on equity and tackling racism.” As NPQ’s Cyndi Suarez noted a year ago in an article about Puerto Rico, increasingly community foundations face a strategic choice: Do they stick with the traditional approach of funding the good work of nonprofits, or do they forthrightly challenge structural inequality by supporting community organizing and civic groups that aim to change those conditions? In Indianapolis, CICF has opted for the latter.

The new strategic plan, called “Inclusive City,” was announced last week and outlines a number of goals. These include support for affordable housing along transit stops, addressing infant and maternal mortality in communities of color, creating new bike lanes in communities of color, and reducing racial disparities in student discipline rates at local schools.

In Indianapolis, racial disparities remain stark. Colombo notes that US census data show that “for every dollar the average white worker in Indianapolis earns, a black worker earns 56 cents.”

“This is the first five-year plan of what will be a generational commitment,” CEO Brian Payne said.

To fund its strategic plan, the foundation has committed $17.5 million over five years—about half of its annual $7 million in disbursements from the Indianapolis Foundation—to initiatives related to its equity goals. CICF is also launching a new “Equity Partners Fund” to raise money from donors to help support the new strategies.

CICF also is supporting advocacy, a major shift for a foundation that previously had studiously maintained a position of neutrality. Its new strategic plan, explains Colombo, includes advocacy goals such as “raising awareness of and addressing the racial disparities in educational outcomes,” “championing policies that support economic justice,” and “advocating for bail access and reform.” In February, for example, the foundation endorsed state Senate Bill 12, a comprehensive hate crimes bill.

Pamela Ross, the foundation’s vice president of opportunity, equity and inclusion, said “changing systems is new for us,” but necessary. “We can’t just sit back and say, ‘It’s too bad,’” Ross told Colombo. “Now we have to get ourselves in the fight.”

Breanca Merritt, founding director of the Indiana University Public Policy Institute’s Center for Research on Inclusion and Social Policy, said CICF’s new strategic plan “is overall a huge opportunity for central Indiana. It brings racial equity to the forefront in a way we’ve not seen in central Indiana,” Merritt said.

One concrete element of CICF’s strategic plan is to support sending 5,000 community leaders and residents to a two-day training called Undoing Racism, a program of the People’s Institute for Survival and Beyond. All 46 foundation employees have already completed the course. Ross told Colombo that the training can be life-changing—helping people in power recognize they’re part of “a system that perpetuates continuous racist policies and things that were created to keep black people down.”

Additional elements of the foundation’s 5-year strategic plan include:

Ross emphasizes that making a dent in racist practices in Central Indiana will require a broad range of community alliances. Ross adds, “We’re not going to be able to do this by ourselves. We’re trying to build awareness and trying to see where we can build meaningful partnerships.”

One of the areas where the foundation is building new partnerships is with churches.

The Rev. Anastassia Zinke of All Souls Unitarian Church says she has been really “impressed with how CICF is thoroughly and systemically and intentionally pursuing things in an anti-racist way. A lot of organizations say they want to, but either don’t understand what that means or don’t put the supports in place to make that happen.” She adds, “I think most community foundations think just about how they can do the work of granting and giving out the money. CICF is going for a much more transformative change.”